It was strange to see the Japanese garden in Clingendael on such a day. It was raining, the strong winds of the previous two days had made the trees look half naked, the tree trunks a glistening, stark black. At last the autumn has come fully into its own. I don’t think I have actually visited Lady Daisy’s creation in the autumn before. Or possibly I did, a few years ago, but my way of looking and experiencing was very different back then. I didn’t remember much and didn’t know what to expect. My pilgrimage to the garden during the six weeks it is open in the spring is customary though and it is a true marvel then, full of blooming trees and bushes, ablaze with purple, magenta, violet, pink – reflecting the flowery vision of Lady Daisy and Japonnaiserie of the times.

What did I think coming here in late October, for once armed with my proper camera? That it would probably look like something out of those fall foliage images of New England and I will take lots of brightly coloured pictures. It doesn’t. It’s actually very sombre and mellow, but beautiful in a very different way. There aren’t even that many trees displaying eye-catching autumn colour. Really only a couple of acers. Once you have feasted you eyes on the interplay of reds between the garden’s “star” maple, a splurge or orangey red on the background of muted greens and soft browns, and the brightly lacquered bridge, you are kind of done with the colour display. 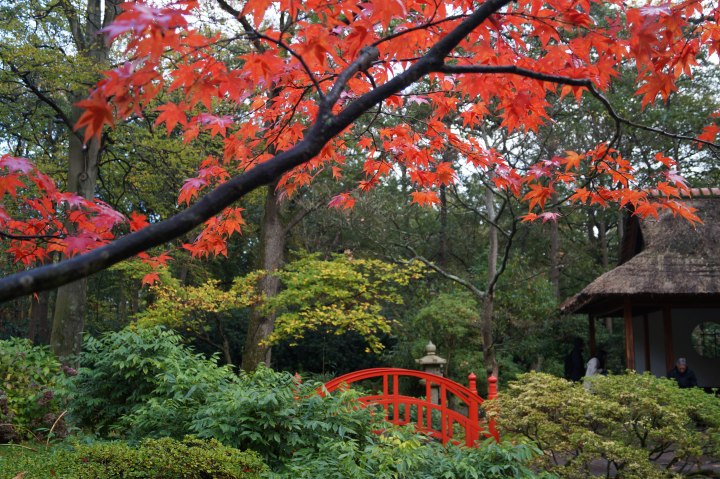 I had also been looking forward to the moss. I love moss. I have tried growing it in my own tiny “Asian garden” at home but after a long-drawn-out battle with the intrepid blackbirds have admitted full defeat. The moss is ostensibly not part of the original garden as conceived by Lady Daisy and her garden architect Theo Dinn – it seems to have been much lighter, sunnier and open back then, lacking the tall trees and the forest floor of today. In the old photographs from around 1920 the ground is covered in meadow flowers, most notably daisies themselves! But nowadays, the spring moss in the Japanese garden is a feature in its own right, a sight to behold. A beautiful emerald carpet, undulating, seemingly endless. I always so long to touch it with my palms, lie on it, smell it. But watch out – dat mag niet, the guardians of Clingendael are ever vigilant! I was struck to see how different the moss looks now. It must have also suffered from the long, dry summer we had this year, its colour very subdued, it lies covered in golden leaves, oak mainly, brownish needles and still bright fern fronds, with an occasional red splodge of sharply angled maple. The oak leaves create little pools among moss mounds and then become beautiful rivers of gold where water once was. 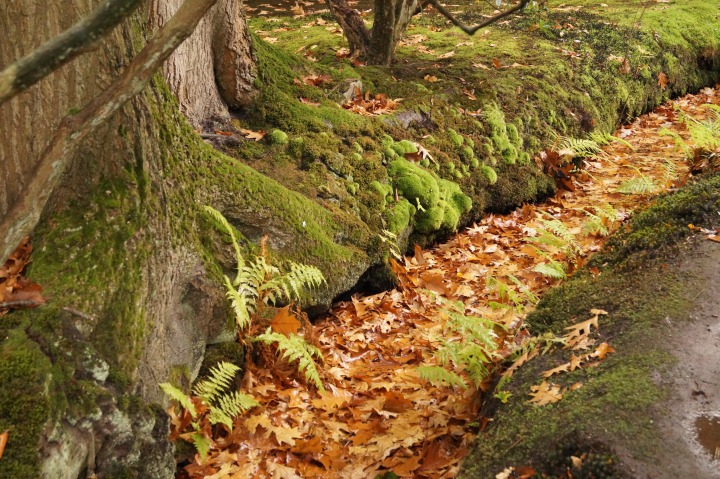 With so much foliage gone, you also notice some phantasmagorical shapes – such as a group of strange bushes on the left from the main path leading from the entrance gate – rising from the ground in ophidian pairs, twisting around, whirling in a circle.  Are these azaleas?! I can’t wait to see what they might actually be when I come back in the spring! 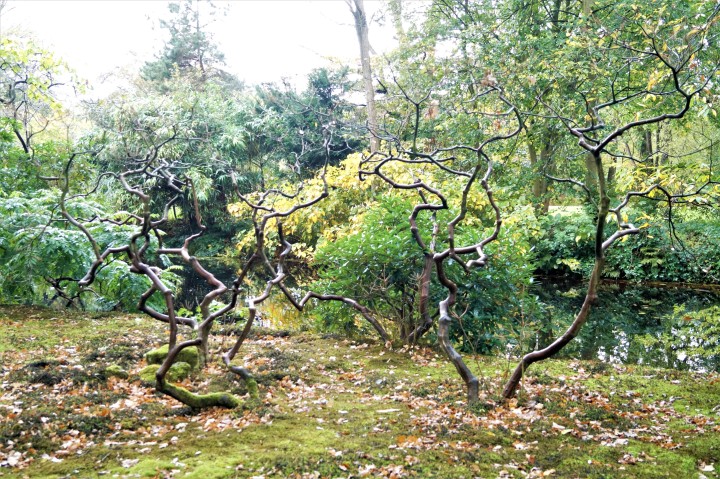 And then there are the stone lanterns, it’s only now that they come into their own. I didn’t properly notice them on the several occasions I was here to admire the spring colour display. But they are an integral part of the place and really stand out now, adding to the garden’s evocative, mysterious atmosphere. How many are there in total, more than 20? My favourite are the kikogata-ikekomi, with its chrysanthemum-shaped top and kasuga-toro (with a deer depicted on the fire box – a symbol of good luck), the former actually the original one brought back by Freule Daisy from one of her trips to Japan. I also love the yukimi-doro – the wide-legged, “snow-viewing” lantern, which is usually found near water and possibly meant to indicate tide in its original usage. I would have loved to see its cap covered in snow, as it is meant to be appreciated nowadays, but sadly there is no access to the Japanese garden when the snow is most likely to grace us with its appearance. 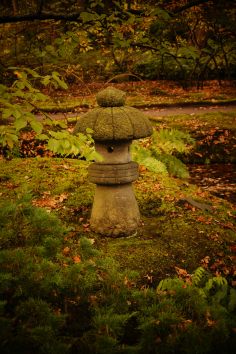 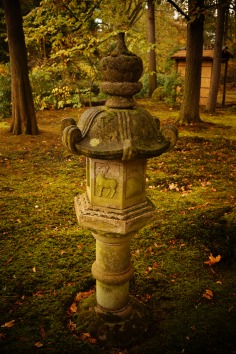 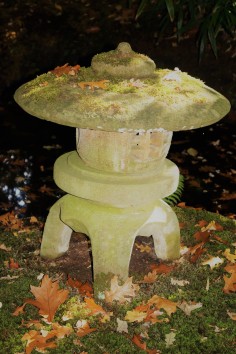 Look – there is a pile of acorns in one of the lanterns’ fire boxes! Who put them there, squirrels or children? Suddenly the mood is lifted, light and playful.

I am glad I have come now. Being here on this bleak day is like meeting an old friend wearing different clothes, trying out a different look. Familiar and dear, but older, sombre, strikingly different. I loved the different look, different “age”, the maturity. I appreciated the colour palette, even though I didn’t leave with a photo collection worthy of postcards from New England.  But I also so look forward to coming back in May  – I love my pinks and purples too much after all.

One thought on “Japanese garden in the autumn – a mellow charm”